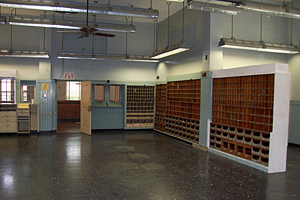 For more than 60 years, the original Winnsboro Post office stood like a fortress in the downtown area, the focal point of all local business and the comings and goings of letters and packages anticipated by many who lived among the cotton and corn fields in Franklin Parish.

The building, built in 1936 at 513 Prairie Street, in Winnsboro’s historic downtown district, has been renovated into a museum, aptly named the Old Post Office Museum. While the building features many new amenities, such as new lighting and a new front door, much of the building remains the same, from the gold post office boxes down to the original wood floors. It is a monument to the best of times.

Gone is the large counter where postal workers assisted people with daily mail business…yet, the indentions of more than six decades of customers’ and workers’ feet remain in the wood. Gone are coats of green paint that covered the walls, which have been stripped down to reveal beautiful cypress wood. Gone are the tattered “Wanted” posters that decorated the walls. Historic pictures and artifacts have taken their place.

The perimeter of the 2-story brick building houses a permanent display of Franklin Parish history, while the interior of the museum rotates different exhibits. The original black iron vault, with the words, “Diebold Safe & Lock Co.” and the date 1936 remains in its original entirety and houses scrapbooks and memorabilia donated by local families. 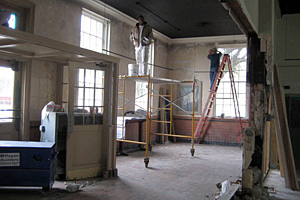 It was while the building was being refurbished that officials stumbled across a secret “tunnel” on the second floor, a surveillance system of sorts, that was not publicly known about until the renovation. The tunnel was used by the postal inspector so he could look down on employees without their knowledge. The inspector had an office on the side of the building and could slip up a ladder into the tunnel on the second floor without workers ever detecting his presence. The tunnel featured slits in the walls, some covered with metal doors that allowed the inspector to watch and listen to what was going on below.

The post office was closed in 1998 when the new, more modern location was built on Louisiana Hwy 15, the main thoroughfare through Winnsboro. Not long after, the city of Winnsboro purchased the building and it sat vacant for more than a decade. 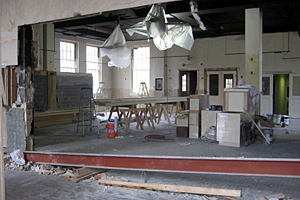 The use of grant and capital outlay funding totaling around $450,000 made the building renovations possible. It now houses not only the museum, but also the offices of the Winnsboro-Franklin Chamber of Commerce, Winnsboro Main Street, Franklin Economic Development Foundation and the Franklin Parish Tourism Commission. Besides a museum and offices, the upstairs portion boasts a conference room, as well as two extra rooms where art classes can be held.

Lamp posts have been added to the back outside portion of the building, making a perfect community gathering spot. The old loading dock has perfect acoustics and now serves as a stage for musical talent when the opportunity arises.